The genesis of antibodies by the adaptive immune response is a natural process. If this immune reaction turns pathological, antibodies can induce other immune cells to secrete immune modulatory molecules. In classical allergy IgE antibodies are generated which prompt mast cells and basophile granulocytes to secrete histamine. Allergies against foodstuff differ from food intolerances, which are marked by an imbalance between an element in the foodstuff and the enzyme which naturally catalyses it’s degradation in the small bowel.  Symptoms of lactose intolerance for instance are caused by the failure of the lactase to cleave lactose into the monosaccharides glucose and galactose and their subsequent absorption in the small intestine; the sugar is further transported in the large intestine where it leads to an excessive growth of the resident bacterial flora, thus resulting in symptoms such as bloating, diarrhoea and flatulence.  This process occurs without the generation of IgE antibodies. 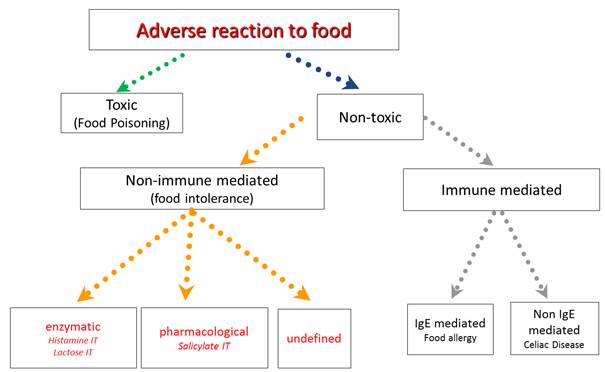 IgG4-mediated histamine secretion has been described over 40 years ago, the current scientific literature however only notes one specific case where IgG4 antibodies were actually able to induce histamine secretion [2]. In particular instances a determination of IgG4 titer has proved to be reasonable such as in the diagnosis of celiac disease, an autoimmune disease triggered by dietary gluten. Due to the higher sensitivity and specificity of IgA antibodies IgG titer is only determined if the patient suffers from an IgA deficiency [3]. There is also a role for IgG during immune therapy by means of “mediated antigen presentation” [4]. Here an increase of IgG4 Secretion, according with a decrease of IgE Production may be expected.

Only recently a number of systemic IgG4 associated diseases have been described, such as autoimmune pancreatitis, Riedel's thyroiditis, retroperitoneal fibrosis [5]. The presence of these antibodies in the connective tissue of various organs initiates fibrosis.  These severe conditions are not associated with food patters and are also not included in classical IgG4 panels.

IgG antibodies are commonly generated during prolonged contact with specific antigens (such as food antigens during small intestinal passage) and do not correlate with their corresponding IgEs; they are rather considered as biomarker for immune tolerance towards their antigens. Serums of beekeepers, who are fairly often stung as part of their occupation, exhibit a high IgG4 titer against bee venom without suffering from bee allergy [6].

Consequently all major European professional associations of allergologists, such as the European Academy of Allergology and Clinical Immunology have issued statement strictly opposing IgG resp. IgG4 testing for food intolerances[7] [8].

Press release by nutridis (Scientific Association for Research and Education in the field of food-intolerances), newsletter Q2/2013