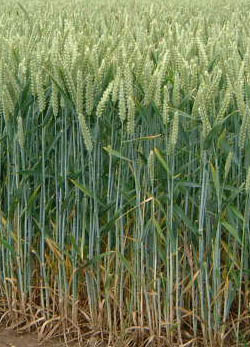 Gluten (from Latin for "glue") is a protein composite that appears in foods processed from wheat and related species. It gives elasticity to dough, helping it to rise and to keep its shape, and often giving the final product a chewy texture.

Strictly speaking, gluten is not the correct scientific term, but it is rather a collective term for the different components of protein in wheat and rye. Research has been conducted on the subject of proteins in the different types of grain since 1907, and since then they have been classified into albumins, globulins, prolamines and glutelins. These groups are again divided into different sub-groups which are in turn divided into further sub-groups. Which means it all gets quite complicated.

Gluten is most commonly used as a collective term for prolamines and glutelins. In the case of wheat the group involves gliadin (a prolamin) and glutenin (a glutelin).

Gliadin has by now been identified as the trigger for coeliac disease (a condition where a gluten-free diet must be observed). However, there are also other components which can cause trouble, which is why, on this website, we always refer to gluten in order to keep it simple. It is essential for coeliacs to remain on a gluten-free diet for life!

Around 80% of the wheat grain consists of gluten.