Coeliac disease is caused by gluten intolerance. It is also known by several names, for instance: CD, (med.) gluten enteropathy, celiac disease (in the USA) or nontropical coeliac sprue. It is a chronic disorder of the intestinal mucosa.  People suffering from this condition are commonly known as "coeliacs". It is not only found in children, but also in adults!

The terms "Gluten sensitivity" or "wheat intolerance" are not yet clearly defined. Most of the studies in this case are just unclear.

A gluten protein called gliadin (a component of gluten, read more in the “Biochemical basics” section), to be found in wheat flour, causes damage to the intestinal mucosa (the lining of the intestine). The result is that the intestinal function is compromised and the absorption of essential nutrients is thus disrupted. As a result signs of nutritional deficiency, inflammation and the familiar symptoms will present themselves.

This means that if someone is diagnosed with coeliac disease they will have to observe a stringent gluten-free (not just a low-gluten) diet. Normally a patient will feel a significant improvement in their general state of health within a few days. After several months blood values will return to normal for most sufferers. More about this in the article "Treatment of coeliac disease".

As little as 0,25g of wheat will have a damaging effect on the small intestine and can result in symptoms.(1)

Coeliac disease can be diagnosed by means of a blood test administered by a medical professional. This blood test will include the measurement of specific antibodies. An exact diagnosis can, however, only be made through a small intestine biopsy (also known as small bowel biopsy). This examination is pain-free and is usually carried out in an outpatient context. Alternative methods for the diagnosis of coeliac disease are thus not to be advised.

You should absolutely NOT be observing a gluten-free diet BEFORE your visit to the medical professional! This can influence the measurement readings and makes it impossible to obtain an accurate diagnosis! 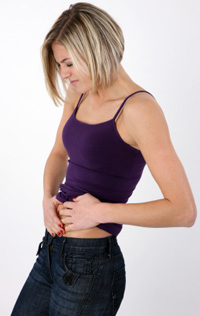 Apart from the active type of coeliac disease there is a differentiation nowadays between further progressive types: in the case of silent coeliac disease patients demonstrate almost complete villous atrophy but experience no or only minor non-specific symptoms and, above all, show no signs of nutritional disorders. The term latent coeliac disease is used when at an earlier stage a villous atrophy once existed in the presence of a diet containing gluten, but normalised when the patient was put on a gluten-free diet and remained normal when the patient re-introduced gluten to their diet. Apart from those, there is the term potential coeliac disease used for the type of people who never showed any of the classical changes in the mucosa of the small intestine, but still show the immunological abnormalities that are typical for coeliac disease.

Coeliac disease and other illnesses

Because it is an autoimmune disease, coeliac disease is connected to some other illnesses which turn the immune system against the body’s own tissues. The most common illness associated with coeliac disease is "dermatitis herpetiformis" also known as Duhring's disease, a skin condition where the body generates antibodies against skin structures. This condition appears in around 10%(3) of patients with coeliac disease. Other associated illnesses that appear quite frequently alongside coeliac disease are thyroid diseases (Hashimoto's thyroiditis), 3%(3), and diabetes mellitus with a frequency of 4%(3). In this particular case antibodies are generated that fight the insulin-producing cells in the pancreas.

Adults with gluten intolerance may also suffer from lactose intolerance!