GLUT and SGLT are transport proteins (carrier proteins) which are responsible for transporting certain substances through cell membranes. GLUT is an abbreviation for glucose-transporter, while SGLT is an abbreviation for „sodium-glucose linked transporter". The physiology as well as the exact functions and tasks of these transport proteins have not been fully examined yet. This means that it is not yet entirely clear by which mechanisms the different types of sugars are being absorbed into the body. There is heated debate amongst experts concerning this. Below is a summary of the current status, though only where relevant for fructose malabsorption.

These transport proteins are non-constant, which means that their production is dependent on need, time of day and age. If, for example, there is a lot of fructose in the chyme, then the SLC2A5 gene will be activated via a certain signal path in order to generate mRNA, which will then be translated into GLUT-5. Fructose can thus be absorbed. The body reacts to the supply of food by starting the corresponding absorption mechanisms. Thus GLUT are generated depending on the concentration of sugar in the chyme, amongst other things, and then transport the corresponding sugars into the cells of the small intestine, and then further into the blood. They are not embedded in the cell membrane, but are able to change their position (see example below).
Comment: mRNA is an abbreviation for Messenger-RNA. It is a copy of a certain gene segment created in the nucleus from which a protein can be produced via different processes. 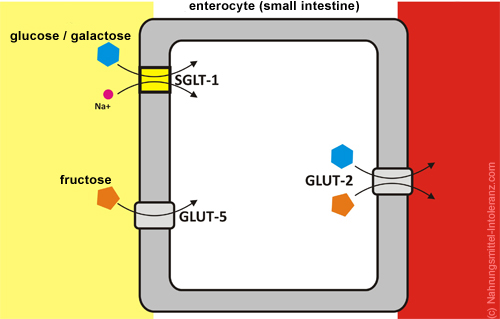 GLUT-2 is very effective at transporting glucose as well as mannose, galactose and fructose through the cell membrane. SGLT-1 transports glucose but not fructose. GLUT-2 is mainly present in liver cells, but also in many other organs such as for example the small intestine, where it is mainly responsible for the transport of glucose from the cells of the small intestine into the bloodstream. Glucose is however mainly absorbed from the intestine into the cells via SGLT-1. This process is dependent on sodium (Na+) which attaches to the SGLT-1 transporter in order to enable it to absorb glucose (and galactose) (4). If too much glucose is ingested with food then the GLUT-2 transporters can transfer to the cell membrane on the side of the small intestine or can also be newly generated on that side of the cell. Since it is possible for the GLUT-2 transporters to absorb fructose in addition, they can help to relieve the GLUT-5 transporters and thus also help to absorb fructose from the intestine.

As outlined above, the quantity of GLUT-5 transporters also depends on the concentration of fructose in the chyme (3). GLUT-5 absorbs the fructose from the chyme and takes it to the small intestine cells. From here the fructose will reach the blood stream with the aid of the GLUT-2 transporters. The production of GLUT-5 is, however, not only dependent on the fructose in the chyme, but is also subjected to a circadian rhythm (2). In rats, for instance, the GLUT-5 is produced much more late in the day than early in the day. Thus the possibility arises that the time of day also may be of relevance to humans here. GLUT-7 is also capable of absorbing fructose from food (5), but it seems to only play a minor role in connection with the absorption of fructose.

It has been mentioned again and again by different sources that sorbitol inhibits GLUT-5 and that it should thus be avoided by those affected by fructose malabsorption. Experience shows that sorbitol (and other sugar alcohols) do indeed have a negative influence on fructose malabsorption. Up to now there is a lack of scientific proof, especially in connection with the underlying mechanisms behind. These sugar alcohols should nonetheless be avoided.

On the basis of the mechanism we have described above we know that glucose can help to absorb fructose: